The new Niesmann + Bischoff ‘Flair’ range proved to a star attraction at one of the most anticipated motorhomes exhibition in Europe, the Caravan Salon. 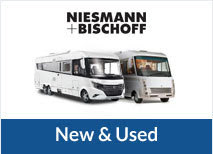 Niesmann + Bischoff reported that some of the visitors at the show who committed to buy the new Flair had no existing motorhome of their own before their purchased. It also said that 40% of the models sold at the event were from the new Flair range.

Information gathered following the exhibition in Dusseldorf revealed the following models from Niesmann and Bischoff were the ‘best sellers’:

Niesmann + Bischoff reported that all of its new customers had opted for the new converter gear box and the 205 HP engine. Interestingly, the company also disclosed that there were 14 different kinds of floor plan sold, proving that its broad diversity of layouts available is still very much in demand.

The Arto range also did consistently well as it did last year with the same amount of vehicles being sold. The Chrome Arto was very popular and it is due to appear at the NEC exhibition with Travelworld this Autumn.